Battle of the books

I was really interested by Loertscher’s article, Flip This Library (Loertscher, 2008). According to Loertscher, “we don’t need a revision. We need a reinvention.” The participatory library is about new models of doing things, which means letting go of a lot of “shoulds” and “can’ts.”

One of the extracurricular activities that they do at my kids’ elementary school is called Battle of the Books , for the 3rd through 5th graders. The kids read from a selection of books over the course of the school  year, attend book discussions, and then participate in a “battle”—i.e., a trivia contest in teams.

At one flag assembly, my younger son (in 2nd grade then) heard them announcing and promoting this program and his eyes lit up. With great excitement he said to me, “Mom, what is Battle of the Books? Do we dress as our favorite book characters and have a play battle?

I thought to myself, “Sadly no, because that would be MUCH TOO AWESOME for the district lawyers to let us do it.” My son was disappointed when I explained to him that the “battle” was a little bit less exciting that he had envisioned.

After I heard my 8 year old’s idea for a “Battle of the Books,” the one in reality sounded pretty dull by comparison. OK, so maybe you might run into a few snags by having a bunch of little Harrys and Hermiones with wands, and hobbits with swords running around (not to mention violating the “no toy weapons at school” rule), but gosh, it sounds fun.

Not that I have a warg in this fight or anything.

Battle of the Books is a good program. Many of the kids love it, but there are also many of them—some who love reading very much, like my son—who fail to see the point. You read some Great Books For Children. You attend teacher-led discussions where the teachers talk to you about the books and a little bit of discussion occurs. And in the end you win points if you can memorize facts about the book and answer questions correctly.

Battle of the Books is not two-way communication, it is not participatory at the level we’ve been learning about in this class. It’s primarily one-way communication, from book to student and teacher to student, with some space at the end for students to dutifully demonstrate that they have absorbed what the books and the teachers have communicated. Yes, Battle of the Books is cast in game form to appeal to children, but it’s not nearly as engaging a game as my son thought of just in the first few seconds he heard the term.

It’s well known that children learn best through play. What do children do with the books they really love? They don’t just want to read a book and memorize facts or receive learned opinions about them. When they love books they immerse themselves in them, they play them, they live them.

This brings me to another one of the readings, about Finding the Future (Danforth, 2011). Like a real life Da Vinci Code, the Find the Future game designed by Jane McGonigal broke boundaries in order to try and engage people deeply, through a game. Jane McGonigal might say that everyone, and not just children, learns best through play. In an interview, McGonigal says, “games do a better job of provoking our most powerful positive emotions — like curiosity, optimism, pride, and a desire to join forces with others. Games are fulfilling genuine human needs the real world is unable to satisfy” (Hohmann, 2011).

Several months ago I read a very eye-opening article (Gray, 2013) about the deficit of creative play for children. (I’d thought many of these things but hadn’t seen them expressed so well before). An emphasis on testing, homework, and structured extracurriculars are making children’s upbringing today less “participatory.” Gray writes, “Children today are cossetted and pressured in equal measure.” They are cossetted—it is too dangerous to let them have a play battle or play with toy weapons, we must shield them from violence and chaos and boo-boos. On the other hand they are pressured—we must get them to read, we must get them to read Important Books, we must get them to the learn the Important Things from the Important Books, and we have to have adult-led discussions and an adult-led structured game on the Important Books so that they are learning the Correct Important Things.

Children, left to themselves, naturally come up with vast amounts of creative elaboration; they have so much to contribute to the participatory library because of their natural joy in developing their most beloved ideas. The more I read about the participatory library, the more I see that listening to the users (children or adult) can lead us to where the energy and passion and real learning is.

Here is a passage from Gray that I found very powerful:

In school, and in other settings where adults are in charge, they make decisions for children and solve children’s problems. In play, children make their own decisions and solve their own problems. In adult-directed settings, children are weak and vulnerable. In play, they are strong and powerful. The play world is the child’s practice world for being an adult. We think of play as childish, but to the child, play is the experience of being like an adult: being self-controlled and responsible. To the degree that we take away play, we deprive children of the ability to practise adulthood, and we create people who will go through life with a sense of dependence and victimisation, a sense that there is some authority out there who is supposed to tell them what to do and solve their problems. That is not a healthy way to live (Gray, 2013).

Let’s conjure some information from the chaos of the universe (Harris, 2006). 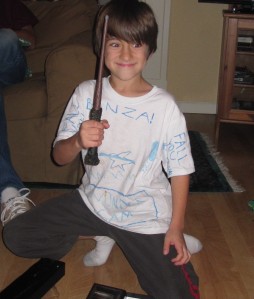 library student, writer, mom, Kindle addict END_OF_DOCUMENT_TOKEN_TO_BE_REPLACED
This entry was posted on Saturday, February 15th, 2014 at 5:43 pm and posted in Uncategorized. You can follow any responses to this entry through the RSS 2.0 feed.
« A story about a girl who does stuff
The imitation of librarians »

11 responses to “Battle of the books”